Getting you back to the life you love! 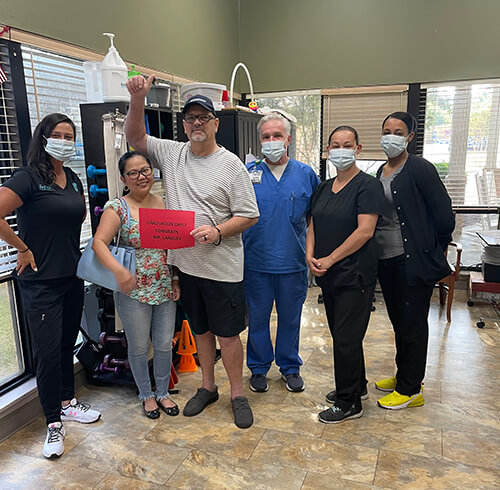 Steven Langley came to Kinder Retirement and Rehabilitation in late April 2022. He was just discharged from the hospital after suffering a subarachnoid hemorrhage. As a result, he was unresponsive and comatose. When Mr. Langley arrived at KRRC, his functional level had improved but his remaining deficits would require extensive therapy with all disciplines.

Balance was an early concern along with lower extremity weakness. Executive function was an ongoing concern as he couldn’t self-regulate his responses to personal needs while in his room. This led to multiple falls. It was suggested he wear a helmet to avoid any damage in the event he hit his head. A touch of vanity showed itself when Mr. Langley laughed and said he “won’t wear it” because it makes him “look funny.” Whether complying with staff instruction or refusing same, Mr. Langley maintained a friendly nature, a joker’s affect, and a big smile.

Though the early days were trying for Mr. Langley, facility staff and Mrs. Langley, improvement could be observed each day. Mr. Langley required “lift” transfers for a few weeks. As he improved, that status was routinely upgraded until he was independent with all transfers.

Early on, nursing, nursing aids and therapy staff had to push Mr. Langley in his wheelchair. He was still a bit impulsive, relying on what he thought he could do rather than strictly relying on therapy’s better judgment. Fortunately, this did not lead to additional falls. As a matter of fact, Mr. Langley did not fall again after the first couple of weeks. His balance returned incrementally. His cognitive judgment improved greatly leading him to a higher level of compliance with therapy’s input. Suffice it to say, what started out as a bad situation resulted in a team-oriented success story.

Mr. Langley was discharged from KRRC in late June 2022. He used a walker to leave the building, but therapy is confident he will be independent very soon. The success Mr. Langley enjoyed during his rehabilitation was in great part due to his commitment to the work and the therapy team’s creativity and diligence. However, the greatest support Mr. Langley enjoyed was that of his lovely wife, Theresa. Her commitment to the process and on-time input was critical, even when the input was uncomfortable to give.

The success story played out like a well written script. It wasn’t easy but for every bump in the road, changes were made, instruction was varied, cues were reinforced, and all parties adapted to every situation. Consequences brought learning, learning brought understanding, understanding brought independence and that independence allowed Mr. and Mrs. Langley to wave good-bye to this part of his journey. We hate to say goodbye to those patients who had such a great impact on us as professionals. Still, we excitedly say to them as they leave, “don’t come back!” (unless it’s for a visit).

Learn more about the services we offer and how Synergy Care can help your patients and your business operations.